Colonel Jeff Cooper was already a living legend when my father and I were invited to interview him at his home regarding his newly introduced Scout Rifle.  See the article here: Cooper Scout as it appeared in The Accurate Rifle Magazine. 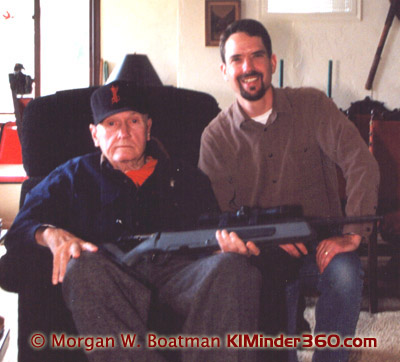 The Colonel and me with the Scout at The Sconce.

For their few remaining years, the Colonel and my father grew to be fast friends.  Down in the vault, we were always thrilled to hear the Colonel’s tales of daring-do, exciting stories afield, and his views on the responsibility of the common man to his brothers.  I was unfathomably enriched by my association with Jeff Cooper and his brainchild, Gunsite Academy. 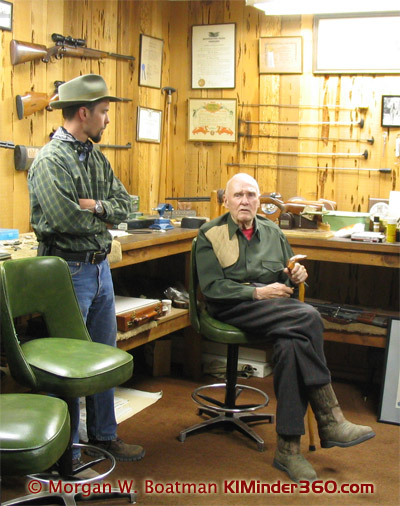 The Colonel regales my father and me with incredible stories down in the Vault.

One of the Colonel’s most treasured gift to mankind is his Color Code of Alertness. 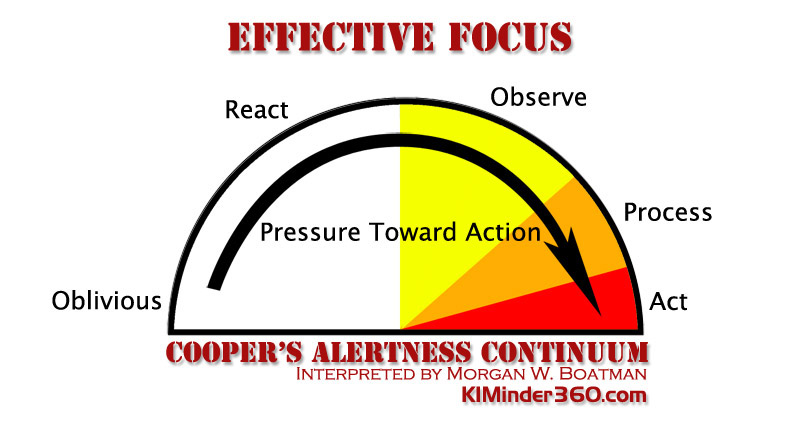 An effective but unremarkable pressure gauge to decisive action looks like this. Some ‘space-out’ time, but when he needs to he can knuckle-down and kick some appropriate ass.

This famous scale codifies the continuum of mental focus from obliviousness to decisive action.  It is often referred to, but rarely truly understood.  It is easily misused because it is mistaken for a method rather than a guide.  Like believing the blueprint is the house.  One cannot live in a blueprint before it is realized.  Colonel Cooper expected students to use the Alertness Scale as a tool to understand and track their progress on a day-by-day and minute-by-minute basis.

Most of us lack the personal discipline necessary to work unaided toward Cooper’s ideal of practical alertness.  Consistent with the ancient traditions of the great sages, he never offered a means or method other than pure struggle.

As you make substantial progress toward your goals by using KIMinder360, you will use Cooper’s Code to monitor your development.  You should be familiar with it.

The Code as pictured here like a pressure gauge, represents the alertness of your mind and senses as the environmental pressure or conscious initiative to make a decision mounts.  Colonel Cooper identified four Conditions you pass through on your way to decisive action, and has colored them White, Yellow, Orange, and Red.

In Condition White, self-direction is impossible because if you are unaware of an opportunity or threat, there is no reason to be alert or focused on anything that will change your situation.  This is not a state of literal deafness and blindness, this is a state of not assigning significance to anything around you.  Only inept reaction is available to the person in Condition White.  You may be very intent on reading the newspaper, but the smell of smoke in the air goes unnoticed. 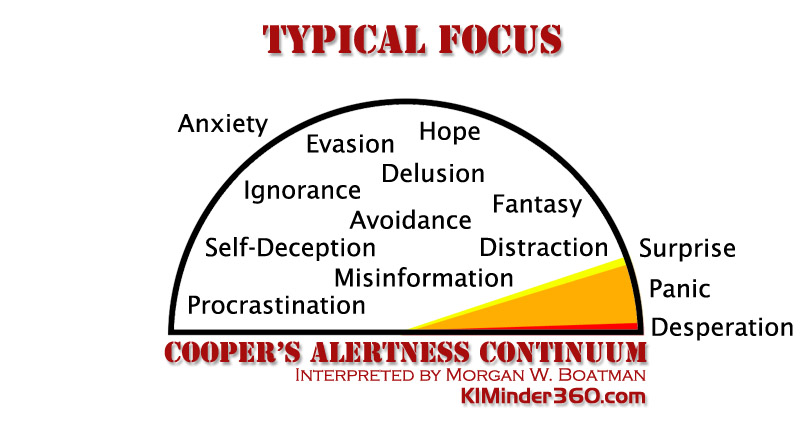 Most people wander through life firmly and comfortably entrenched in the white zone.  They are oblivious to what is going on around them.  Their attention is either unfocused or distracted.  Threats and opportunities easily sneak up on them unnoticed.

In Condition Yellow, some measured response is possible to observed conditions.  We can avoid minor crises and become aware of conditions that may evolve into larger problems or opportunities.  In this state significance starts to emerge from your immediate surroundings.  At this level, the OODA loop can begin.

In Condition Orange, the trained student is no longer easily distracted from the task at hand.  A threat or goal has presented itself and high levels of personal resources are committed toward it.  Orange is the phase to process and coordinate the data collected in Yellow.  Strategies are formed.

To the untrained, Orange is the trigger for panic: a denied or overlooked problem has “suddenly” burst into a full-fledged emergency.  Data collection, problem-solving, testing, and bailing out the boat all has to happen simultaneously.

Condition Red is of course the time to act.  Decisive, self-directing action is based on the strong foundation of options opened up by the work done by Yellow and Orange, not just “the problem.”  Direct assault on a problem is not always the most effective solution, but if no data has been gathered before the problem arises, then the untrained is left with limited choices.  The Situationally Aware student will have abundant options because he or she has already identified, escape routes, fire extinguishers, improvised weapons, probable allies, and more.

When ordinary people get thrust into Conditions Orange or Red they are so unfamiliar with these states that they perform poorly.  They react to sudden shocking stimuli rather than act upon strategic judgement.

Strategic Judgement is the result of observation, processing, and analysis of your immediate surroundings.  It is a sense of comfort dwelling at the higher levels of Cooper’s continuum.  Perhaps ironically, those who have trained in Situational Awareness and Strategic Judgement experience fewer instances of crisis in their day-to-day lives yet are capable of tolerating much higher pressure when it does arise.

One of your goals as a KIMinder360 student is to reside within The Code’s Yellow State for the majority of your waking hours.  Initially, this can be exhausting and frustrating, but with training it becomes sustainable and productive. 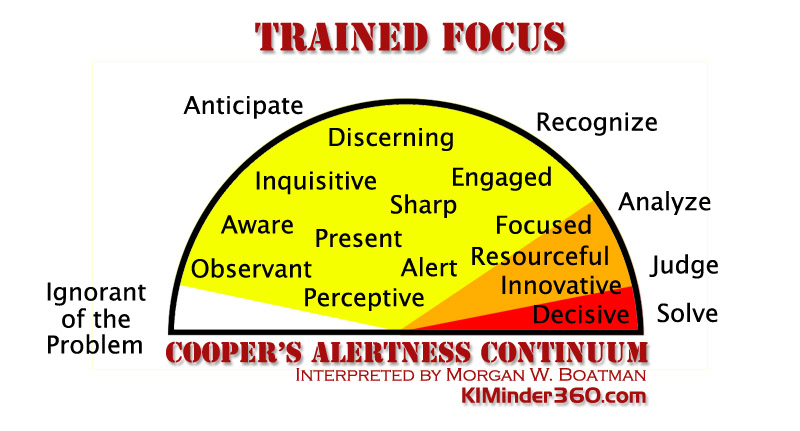 Living in Condition Yellow is our goal not only because when we are alert it is hard to miss crucial details around us, but because in Yellow we cannot lie to ourselves.  Self-deception is the biggest foe to crisis control we face.  Denying the early indications of trouble or opportunity continually position the untrained at a spiraling disadvantage.

The comfort of the White Zone is enticing.  And in today’s insulated society, the untrained can survive in ignorance for a long time.  In order to thrive, to excel, you must make the decision to step into truth.  Condition Yellow demands that you open your eyes to what is really happening around you.  The higher your threshold to entering the Yellow Zone, the more complicated your life will be.  Are you ready?

Occasionally, you will move smoothly into orange level.  And in special training conditions, you must become comfortable within the red zone.  Just like swimming, your performance as the ship sinks will be much better if you have trained in the deep end of the pool.

Colonel Cooper gave us a precision tool for understanding our survivability in crisis and everyday life.  KIMinder360 gives you the training to realize that understanding.